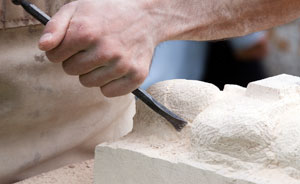 Christopher has shown sculpture and paintings at the Royal Academy Summer Exhibition.  His work is in private collections in America and England.

He has also exhibited and sold under the alias Richtor Aischeppe.  He should not be confused with the artist Christopher Paice DFA.

Christopher Porter Paice is currently seeking representation by an artists' agent or dealer.

Christopher Porter Paice has been a tutor and practitioner in sculpture and painting for the whole of his career.  He now focuses on creating naturalistic oil paintings and mainly marble sculpture reinvented from natural observation and imagination.

Many of Christopher's iconic creations can be seen at high resolution on this website, and they can also be viewed by appointment at his studio-gallery in mid-Norfolk, United Kingdom.  They are fine examples of British marble sculpture and oil painting.